Omalee Fern Mathews, 88 formerly of Friendship, West Portsmouth and McDermott, died peacefully on Friday April 8, 2022 at ProMedica Skilled Nursing and Rehabilitation of Dublin, Ohio. She was born August 4, 1933 on Dry Run to the late Perry and Myrtle Browning Smalley.

Along with her parents she is preceded in death by her husband Walter E. Mathews whom she married December 6, 1952, a son Kenneth E. Mathews, sister Pauline E. Tracy and brother Elmo F. Smalley.

Omalee had been a teacher’s aide at Friendship School, worked at Price Insurance as well as obtained her realtor’s license. She was a longtime supporter of the Girl Scouts of America as a Camp Counselor as well as a volunteer for TOSRV as a Ham Radio Monitor (N8ERP) and was a team member of the Jim and Jan’s Gospel Music Time for many years where she touched many lives. Omalee was a past member of the Nauvoo United Methodist Church.

She is survived by her daughter Pamela S. (Neil) Bobson, brother Eugene Smalley, sisters Eileen Venturino, Joann Mace, and Carolyn (Paul) Rayburn, along with many nieces and nephews.

Graveside services will be held Tuesday, April 12th 1:00 p.m.at Scioto Burial Park in McDermott. Friends may gather starting at 12:30 p.m. In lieu of flowers please make any contributions to the West Portsmouth Youth Sports Complex c/o 1420 13th Street, West Portsmouth, Ohio 45663. Arrangements are under the direction of the Roger W. Davis Funeral Home in West Portsmouth. Condolences may be sent to www.rogerwdavisfuneralhome.com. 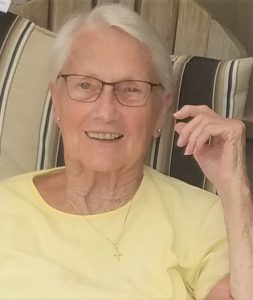