Judith Gay “Judi” Johnson, 83, of South Portsmouth. KY, went to be with her Lord on Sunday, April 3, 2022.  She was born July 14, 1938, in Kansas City, MO to Bonnie Russell and Lena Frisbie Russell.  Judi enjoyed being a majorette in high school and she went on to receive a B.A. in Elementary Education from the University of California.

She married Bill McDaniel and the couple had two children together. After her first marriage ended, she met John Johnson at a church dance. They couple was married May 24, 1975 in Hayward, CA and later were married for eternity in the Columbus, OH Temple of the Church of Jesus Christ of Latter-Day Saints.  Judi loved learning about different cultures and languages.  This led John and Judi to host foreign students in their home. She enjoyed teaching kindergarten for 30 years in the Newark Unified School District in California. She especially loved to play the piano for the children as they sat on her area rug and sang songs.

After Judi retired, she moved to the Portsmouth area to be closer to her daughter’s family.  Three years after moving, her husband John, the love of her life, suddenly passed away. In 2012, she survived breast cancer.

Judi was a devout Christian. She belongs to the Church of Jesus Christ of Latter-Day Saints, where she received much love from ward members.  Judi’s family, church, and animals gave her great joy. She loved going to the library, LIFE Center, and going out to eat with her loving caregiver, Judy Martin. Some of her favorite crafts included knitting, knitting machine knitting, crocheting, quilting, embroidery, tatting, calligraphy, making fine jewelry, and cake decorating. She made the best pumpkin pie and cinnamon rolls!

She is survived by her son, Barry McDaniel of Lancaster, CA; her daughter and son-in-law, Becky Joy & Christopher O’Connor of South Portsmouth, KY; four grandsons, Adam and Draco McDaniel, Joshua and Nicholas O’Connor; her granddaughter, Brionna (Heather) O’Connor; and a great-granddaughter, Elaina O’Connor.

Family and friends may gather at 2 P.M. Tuesday at the Ralph F. Scott Funeral Home in Portsmouth to process to McKendree Cemetery. Graveside services will be held at 3 P.M. at McKendree Cemetery with Bishop Gale Beaman officiating. 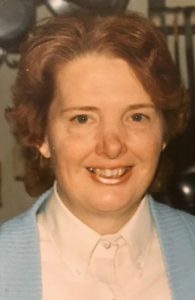