Edward Jay Long, 55, of Wheelersburg, passed away unexpectedly in the line of duty with the Portsmouth Fire Department on Tuesday, March 22, 2022 in Portsmouth. He was born May 29, 1966, in Cherry Point, NC, a son of the late Jeanette Faye Mains Long and Paul Edward Long, who survives.

Ed joined the Portsmouth Fire Department on March 17, 1995 and served 27 years as a Firefighter/EMT. He was currently serving as Engine 2 Engineer and was an excellent Driver/Engineer by all accounts. Ed had also served as a Special Deputy with the Scioto County Sherriff’s Office, having received his commission in July 1986. A member of St. John Lutheran Church, Ed was a 3rdDegree Mason with the Western Sun Masonic Lodge and a 32nd Degree Scottish Rite Mason. He was a veteran of the U.S. Army and was honorably discharged as a 2LT. For his service, he was awarded the Army Service Ribbon and the National Defense Service Medal. Ed was also a member of the International Association of Fire Fighters.

A very active Boy Scouts of America volunteer, Ed served as the Packmaster and Troopmaster of the former Troop 37, helping many young men realize their dreams of earning the rank of Eagle Scout. The troop recently merged with Troop 12 and Ed continued his hard work with that troop. He had attended Marshall University where he was a member of the ROTC and he then received Associate Degrees in Math and Science, as well as a Bachelor in English Literature from Shawnee State University. Ed was a proud 1984 graduate of Northwest High School.

Surviving is his wife, Lisa Nicole Coburn Long, whom he married May 21, 1994, in Wheelersburg; his father, Paul E. Long of McDermott; three children, August Cole Long, Colin Jay Long and Calista “Callie” Faye Long, all at home; his sister, Paula (Steve) Strunk of Raleigh, NC; and his brothers and sisters with the Portsmouth Fire Department and Scioto County Sheriff’s Office.

The family will receive friends at the Ralph F. Scott Funeral Home in Portsmouth Saturday from 4 to 8 P.M. and from 2 to 3 P.M. Sunday at the SSU Athletic Center.

Masonic services will be conducted by the Western Sun Lodge at 8 P.M. Saturday at the funeral home.

Edward gave the gift of life through organ and tissue donation. 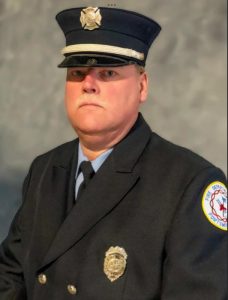