Gene was a member of Pleasant Valley Community of Christ Church.  He retired from Waller Brothers Stone Quarry in 1992 after 47 years. For many years he had a TV repair shop.  Gene played baseball, pitched horseshoes and coached Little League.

Funeral services will be 12:00 p.m. on Wednesday, March 2, 2022 at Pleasant Valley Community of Christ Church with Daron Lilly assisted by Phil Crabtree and Jeff Mitchell officiating.  Burial will follow at Rockwell Cemetery in Lucasville.  Family will receive friends on Tuesday evening from 5:00 – 7:00 p.m. at Botkin Hornback Funeral Home in Otway. 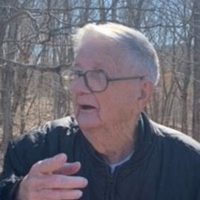