Robert (Bob) Cook, 84, beloved father and husband, was called to his eternal resting place on February 14th, 2022 at SOMC Hospice. He entered this world on September 12th, 1937 in Wheeling, WV., born to the late Charles and Maribelle Cowman Cook. In addition to his parents, he was also preceded in death by his brother Tom Cook. He is survived by his wife Martha Fitch Cook; two daughters, Sara (Jim) Daehler and Laura (Steve) Blazer; a son John (Michelle) Cook; 11 grandchildren; 2 great-grandchildren; and his 2 Westies, Millie and Mollie.

Bob and Martha met their sophomore year at Portsmouth High School, from which they graduated in 1955. Bob went on to graduate from Purdue University with a Bachelor’s degree in Metallurgical Engineering in 1959. Bob and Martha were married at First Presbyterian Church in Portsmouth on June 13th, 1959. They moved to Chicago for Bob’s first job with Reynolds Metals Company, but then moved back to Portsmouth when Bob accepted a job with the New Boston Works of Detroit Steel. He was promoted to Chief Metallurgist and held that position until the closing of the New Boston Works. He maintained that same position at his final employment at Armco Steel in Ashland, Kentucky until his retirement. Bob was a member of First Presbyterian Church where he served as a Deacon and an Elder. He was a member of the Rotary Club where he served as President and became a Paul Harris Fellow. Bob was very involved in the Portsmouth Mural Project and spent many hours working with artist Robert Dafford doing research for the murals. His hobbies included making golf clubs and playing bridge. 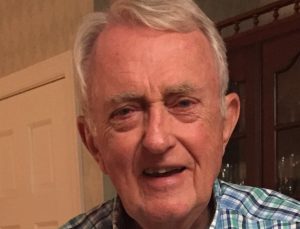