Nita Lee Russell, 94, of Portsmouth passed away with family at her side Tuesday, February 1, 2022 at Brookdale Muirfield in Dublin, Ohio.

Nita Lee was born September 30, 1927 to the late Glen Manley and Wanetta  (Ressinger) Manley.  In addition to her parents, she was preceded in death by her husband of 60 years, William Glenn Russell, brother Richard Manley, aunt Nellie Ressinger and brother-in-law Richard Hunter.

Nita Lee was a graduate of Portsmouth East High School. She then joined the Cadet Nurse Corps in 1945 and graduated from the Mercy Hospital School of Nursing in 1948. Nita Lee worked as a Registered Nurse until she started her family, however she continued to be an active member of the Mercy Alumni Association and Mercy’s TWIG Guild.

She was a Brownie troop leader for her daughters, volunteered for the Red Cross Blood Drive, Meals On Wheels and Sierra’s Haven for New and Used Pets and was an active member of Cornerstone Methodist Church in Portsmouth.

Nita Lee was blessed to live in a unique neighborhood, where neighbors became friends and looked out and cared for one another.

A Memorial Service will be held at a future date  under the direction of the Ralph F Scott Funeral Home.

Memorial contributions in Nita Lee’s memory may be made to Sierra’s Haven for New & Used Pets, 80 Easter Dr. Portsmouth, OH 45662. 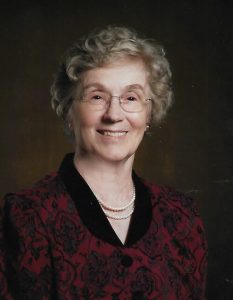