Delores Jean Hall of Stout, Ohio, died Thursday, January 18, 2022 surrounded by her family at their home. She was born on September 3, 1938 in Portsmouth, Ohio to the late Perry Hall and Macy Puckett Hall.

Delores retired from Goodyear/ Martin Marietta/ USEC for more than thirty years handling various responsibilities, including serving as Director of Personnel and traveling the country as a recruiter. Delores also worked with her son Robert Tracy Hoover and her daughter in law, Marie Moraleja Hoover, in their law practice as a paralegal and office manager after she retired. Delores obtained her Bachelor’s Degree from Shawnee State University and a paralegal certificate from Capital University.

Along with her parents, she was preceded in death by two husbands, James Weber and Robert V. Hoover, a brother Donald Hall, and a niece Bridget Brooks.

Delores loved traveling the world visiting places such as Greece, Italy, England, Russia, Philippines, Ireland, and many other places.

Graveside services will be held on January 28, 2022 at 4:00 p.m. at Scioto Burial Park in McDermott with family and friends. Arrangements are under the direction of the Roger W. Davis Funeral Home in West Portsmouth, Ohio. Condolences may be sent to www.rogerwdavisfuneralhome.com. Family requests no flowers; rather, donations should instead be made to the USSA Adult Day Center at P.O. Box 597, Portsmouth, Ohio in memory of Delores Hall. 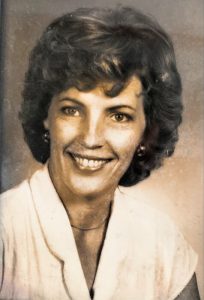