Janet Gayle Alexander, 82, of Wheelersburg passed away Sunday, January 9, 2022 at her home. Janet was born August 9, 1939 in Scioto County to the late Howard Russell Chamberlin and Myrtle Andre Chamberlin. Janet had been employed for Dr. George Pettit in the Billing Department. She was a member of Union Freewill Baptist Church and until recently played piano at Dogwood Freewill Baptist Church. In addition to her parents, Janet was preceded in death by her husbands, James Edward Conkey, who she was married to for 22 years and he passed away September 3, 1980 and Raymond Lee Alexander, who she was married to for 36 years and he passed away June 18, 2019. Janet is survived by four sons, Greg (Cheryl) Conkey, Ray & Sue Alexander, Steve Alexander and Brian (Julie) Alexander; a daughter, Barbara (Kirt) Baker; a sister, Linda (Larry) McFarland, who her parents raised from child birth. Janet is also survived by fifteen grandchildren, James & Kristan, Jennifer, Jeb, Jocee, Matt, Lindsey, Olivia, Tyler, Taylor, Eric, Jacob, Suellen, Julia, Adam and Brent & Cody Acree and fifteen great grandchildren.

Services for Janet will be 11:00 am Thursday, January 13, 2022 at Harrison-Pyles Funeral Home in Wheelersburg with Pastor Chris Oiler officiating. Interment will be in Memorial Burial Park. The family will receive friends at the funeral home 5:00-7:00 pm Wednesday, January 12, 2022 and one hour before the service on Thursday. Condolences to the family may be made at www.harrison-pyles.com. 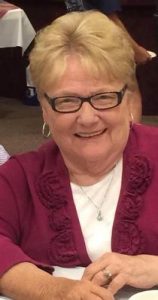