Pamela Kessinger, 69, of Friendship, went home to be with the Lord on Saturday, January 8, 2022 at SOMC Hospice Center surrounded by her loving family.  She was born June 8, 1952 in Miamisburg, OH, daughter of the late Bill Adams and Audrey Cook.

She was a member of Bethel United Methodist Church, owner of Pam’s Tax Service, and a babysitter for numerous children over the years.  She was the most amazing wife and mother.  She always put God first, then her loving husband and children.  She enjoyed spending time with her family, shopping, reading, but her great enjoyment was attending Church.  She dearly loved her Church family and had a great appreciation for her Pastor, Rick Phillips.

She is survived by the love of her life of 51 years, Adrian “Sam” Kessinger, her two children, Bryan (Frannie) Kessinger of Stout and Carrie (J.B.) Kessinger-Berry of Friendship; six grandchildren who were the light of her life, Nicholas Kessinger, Gabby (Jonathan) Stevens, Josie Berry, Bryson Kessinger, Logan Kessinger, and Samuel Berry; a brother, Jack (Mary Ann) Nagel of Las Vegas, Nevada, two sisters-in-law, Beverly Kessinger of Friendship and Judy Kessinger of Winston Salem, North Carolina; her extended family, Terri Collins of Sciotoville, and Brenda Haynes of West Portsmouth, Ohio; and several nieces and nephews.  She is also survived by her special friends, Betty Foster, and Wendy Essman, Kady Essman-Lang, and Aliza Lang, who she loved as if they were her own.

A visitation for friends and family will be on Tuesday evening from 4:00 P.M. to 7:00 P.M. at Melcher Hammer Funeral Home, and again on Wednesday, one hour before the service.

In lieu of flowers, it was Pam’s request that donations be made in memory of her to her beloved Bethel United Methodist Church. 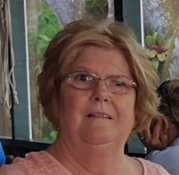