Delmas C. Conley passed away on January 4, 2022, at his home. He was born on March 18, 1942, in Baltimore, Maryland to the late Orville Conley and Dorothy Conley Jamison.

In addition to his parents, he was preceded in death by former wife and mother of his children, Judy Conley; great-grandson, Cash Ryan Newsom; and grandson, JT Conley.

Delmas graduated from Valley High School Class of 1960. Following graduation, he began farming and started a family. His family and farming were two of the great loves of his life. Anyone who knew Delmas would agree that he was the hardest working man you could ever meet. He had a head for business and an entrepreneurial spirit that led him beyond the farm to starting a tire business, Conley Trucking, and Conley River Terminal. Delmas loved his community and was always willing to support community efforts including youth sports and numerous charities that were dear to his heart. While he never wanted to be recognized for what he did, he worked hard be able to help his family, his friends, the township of Wheelersburg and all of Scioto County.

Beyond business, Delmas made a name for himself in the world of Dirt Track Late Model racing. He was inducted into the Hall of Fame of 2003 and tallied 561 career feature victories over seven decades of racing as one of the most admired drivers in the racing community.

Visitation will be held at Harrison-Plyes Funeral Home located in Wheelersburg on Sunday, January 9, from 3:00pm to 7:00pm. The funeral service will be held Monday, January 10, at 11:00am with Dr. Calvin Ray Evans of Rubyville Community Church officiating. Interment will be in Memorial BurialPark.

In honor of his generous spirit and in lieu of flowers, donations can be made to St. Jude Children’s Research Hospital, one of his favorite charities. As Delmas would always say, “Work hard and be kind to people.” Condolences to the family may be made at www.harrison-pyles.com 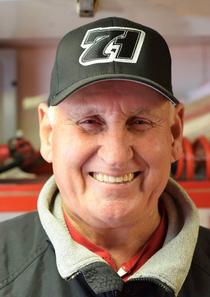