Garrettsville – Betty (Toni) Burchett, age 90 died peacefully at her daughter’s home Thursday, December 30, 2021 with her daughter by her side. She was a former resident of North Bloomfield, born at home in Minford Ohio Scioto County on March 15, 1931 the daughter of Gennero (Jimmy) and Fannie (Traylor) Minnzelli. She worked as a med tech at the old Portsmouth General Hospital and Smith Everett hospital in Portsmouth. She then moved to Warren and later to a farm in North Bloomfield to raise her family. Toni worked as a med tech at Trumbull Memorial hospital and got her registry in histology and Associates Degree. She also worked at Saint Joseph hospital and as a teacher’s aid at North Bloomfield High School, also served in the Navy as a hospital Corpsman.

She was a member of Saint Mary’s Church in Orwell and the Daughters of Mary.  Also, she was a CCD secretary, teacher and Director, greeter, coleader of children’s liturgy, a member of the liturgy committee and Eucharistic minister for the sick and homebound. Her greatest joy was helping others. She was part Cherokee and enjoyed making Indian crafts and angels.

She was preceded in death by her parents, husband Luther, sons Dr. Douglas and (Marsha) Burchett and Brian Burchett, daughter Eva Carpenter, sisters Regina McLean and Katherine Bowers and Anna Bobanich and her brother John Minzelli. 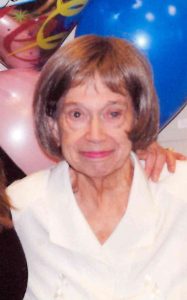