James Dale “Jim” Luttrull, 86, recently of Williams Road, Piketon, Ohio, passed from this life unto the next, on December 17, 2021, after a multiple-year battle with dementia. He was born in May of 1935 in Pike County, Indiana, the third child of the late William Everett Luttrull and Kelsie Ree Ragsdale. He grew up with and is survived by three siblings, Everett Paul Luttrull and wife Millie of New Carlisle, Ohio, Evelyn Romanoski of Wisconsin, and Wanda Lightsey of Florida. As a teen, he loved tinkering with cars, motors, and all things mechanical, and this continued to be a passion for him throughout his life.  He worked as an operating engineer for BG Danis and in his later years was a bus driver in Trigg County, Kentucky.

He was preceded in death by his loving wife of 63 ½ years; his sister-in-law, Barb Luttrull; his son-in-law, Wayne Salyers, and his ninth grandchild, Corey Harper.

The funeral service will be held at 1:00 pm, Wednesday, December 22, 2021 at Botkin Hornback Funeral Home in Waverly with Drew Karst of Sovereign Grace Church in Chillicothe officiating.  Burial will follow in Mound Cemetery. There will be a visitation at the same location beginning at 12:00 pm. His family will be present to welcome loved ones. 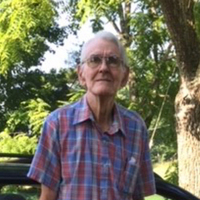