William Gaylord Johnson, 74 of Beaver passed away Saturday, November 27, 2021 at SOMC Hospice. Born July 28, 1947 in Portsmouth  son of the late Samuel and Bonnie Pell Johnson, he was a retired engineer for N&S Railroad and attended Stockdale United Christian Church.

He is survived by his wife, Nora Parker Johnson; one son, Richard Johnson; one sister, Sue (Steve) Pegg; two brothers, Paul Johnson, Sammy Johnson, and several nieces and nephews. In addition to his parents, he was preceded in death by many brothers and sisters.

Funeral services will be conducted at Noon, Wednesday, December 1, 2021 at Erwin-Dodson-Allen Funeral Home in Minford with Pastor Aaron Swango officiating. Burial will be at Scioto Cemetery in Stockdale. Friends may call at the funeral home from 11:00 a.m. to Noon prior to the service. In lieu of flowers donations can be sent to James Cancer Hospital Solove Research Institute in William’s name for cancer research, 460 W. 10th Avenue, Columbus, Ohio 43210. Online condolences may be sent to www.edafh.com. 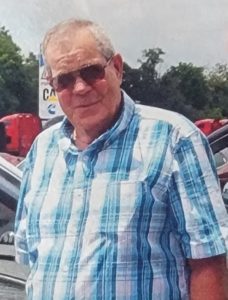