Louis Francis Kielmar went to be with the love of his life, Freda, November 23, 2021 at his home. Born February 27, 1931, Louie attended St. Mary’s High School. He worked at his fathers’ Liberty Bar and Carry-Out. He then entered the U.S. Navy during the Korean War, serving on the USS Wisconsin. He married Freda White, the love of his life, September 15, 1951. Upon returning from the service, Louie was employed at the N&W Railroad until his retirement. He then owned and operated Louie’s Carry-Out for several years. He is preceded in death by the love of his life, Freda, who passed December 22, 2018. Also, he lost his son John, grandson Justin Singer, great-grandson Alex Wiley and two sons-in-law, Steve Meadows and Alan Huff.

Louie was a hard worker and loved to stay busy. He will be greatly missed by his buddy, Max. He loved playing the lottery and was a proud member of the American Legion, James Dickey Post #23.

In lieu of flowers, buy yourself a scratch-off lottery ticket in Louie’s memory. 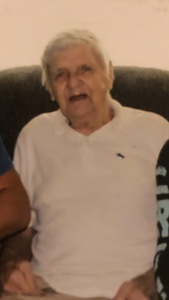