Anna Lucille Marlowe, 57, of Lucasville, died Tuesday, November 2, 2021 at SOMC. She was born December 25, 1963 in Warsaw, Indiana to the late Carl and Missouri (Collins) Pierce.

She was a Nurse’s Aide, she loved to crochet, loved her family, and most of all, Annie loved her Lord.

In addition to her parents, she is preceded in death by her husband, Dan Marlowe, who died in 2016, her precious dog Jack, and two brothers-in-law, Marvin and James Marlowe.

Annie is survived by a cousin, Henry Collins of Sunbury, OH, her second-cousin, Kay Williams and her children; Daniel Williams, Matthew Williams, and Ashley Williams-Hall, and her life-long friend, Sue Stackpole, all from Sunbury. She is also survived by a sister-in-law, Patricia Noel, two brothers-in-law, Richard and Preston Marlowe, and several nieces, nephews, and cousins.

Graveside funeral services will be 1:00 P.M. Tuesday, November 9, 2021 at Cooper Cemetery in McDermott.

In lieu of flowers, donations can be made to the funeral home to help cover the funeral expenses. 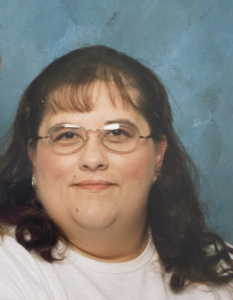