Joan Bivens Rollins, 89, of West Portsmouth, passed away Wednesday, October 27, 2021 at the SOMC Hospice Center. She was born February 22, 1932 in Queens, Lewis County, KY, a daughter of the late Bruce and Pauline Webb Bivens.

Joan was a member of First Baptist Church in West Portsmouth. She had worked at the former Williams Manufacturing Company and as an egg inspector for the USDA.

She was preceded in death September 3, 2000, by her husband, Clarence Rollins. The couple was married in Portsmouth on April 10, 1947. Also preceding Joan in death were her son, Clarence Rollins, Jr.; three siblings, Stanley and John Bivens and Norma Jean Nichols; and a grandson, Jeremy Rollins.

Funeral services will be held at 1 P.M. Monday at the Ralph F. Scott Funeral Home in Portsmouth with Pastor Mike Davis officiating. Unvaccinated individuals are asked to wear a mask.

The family will receive friends at the funeral home Monday from 11 A.M. until the funeral service hour. 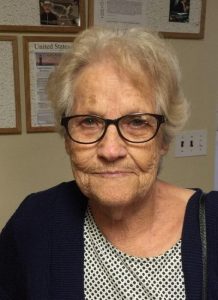