Thomas Keith “Thom” Maynard, 64, of New Boston, joined the largest bluegrass band on Wednesday, October 27, 2021. He was born to the late Claude Clifford and Edna Muriel Weaver Maynard in Portsmouth on November 26, 1956.

Thom was of the Christian faith and loved our Lord and spoke with him often. Thom grew up in West Portsmouth and attended Portsmouth West High School. He was a well-known bluegrass musician mastering the fiddle at age 14 and was sneaked into a dance party at the New Boston Eagles to be asked to play with the bluegrass band that was performing that night. Thom also mastered the guitar and mandolin, but the 5-string banjo was his passion and he went on to become one of the area’s best known banjo players. He always played at the R.W. Skeens Bluegrass Festivals in South Webster and eventually became a member of Vernon McIntyre’s Appalachian Bluegrass Band in the mid-1970’s. With them, he performed at the Grand Ole Opry and Lincoln Center in New York. Thom traveled throughout the United States and grew up very fast with the wealth of bluegrass musicians we have all heard of. Thom played with Bill Monroe, Ralph Stanley, J.D. Crowe and Flatt & Scruggs. He listened to every Flatt & Scruggs album he could find so that he could play his Gibson Mastertone to the standard of Flatt & Scruggs. Thom had an ear for rhythm and timing and if he was playing his banjo with you and you were “off”, he’d let you know.

During the mid-1980’s, Thom traveled to Texas and played at numerous bluegrass festivals with this brother, Ken. Ken on guitar and Thom with his 5-string – that’s what he loved the most- the Maynard Brothers playing together. While in Texas, Thom also worked as a pressman for Reynolds and Reynolds in Arlington. He had also worked for the Village of New Boston and had many friends in the New Boston community.

Thom enjoyed standing in his mother’s living room all night long and playing with all his buddies – the louder, the better. He was a true country boy who enjoyed hunting, fishing, drinking beer and smoking his cigarettes.

Thom is survived by his sister, Claudia Sue (Ray) Wilburn of Wheelersburg; his very loving and special companion, Linda Young of Columbus; and cousins, Lewie Maynard and Donna Sue Bentley.

In addition to his parents, he was also preceded in death by his brother, Kenneth Allen Maynard,

Claudia would like to thank the SOMC ER & ICU staff and Natalie, NP and Dr. Katpally for all the love, support and care given to her little brother, Thom.

Graveside services will be held at 11 A.M. Saturday at McKendree Cemetery with Chaplain Daron Lilly officiating. Arrangements are under the direction of the Ralph F. Scott Funeral Home in Portsmouth.

In lieu of flowers, his sister Claudia is requesting donations to the funeral home as Thom thought he did not need a life insurance policy.

“My loving, stubborn little brother, I put your picks in your right-hand pocket. Go find Danny and Matt and pick & grin.” 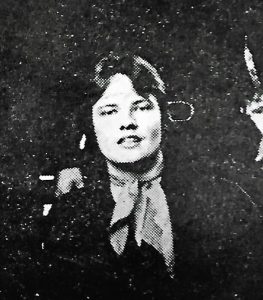