Chad Allen Bennett, 34 of West Portsmouth, died Monday October 25, 2021. He was born August 11, 1987 to Scott Allen Bennett and Mischelle Leann Puckett Coffey. He was preceded in death by his grandmother Pauline Puckett

Chad was a graduate of Portsmouth West, he is a Union Carpenter and a member of Carpenters Local 437, he is also a Pee Wee football coach for West. He played football for the Tanks and Warriors semi pro football teams and he fought Hard Knox MMA. Along with his parents,

Funeral services will be 12:00 PM Noon on Saturday October 30, 2021 at the Roger W. Davis Funeral Home in West Portsmouth with Chas Horsley officiating. Friends may call at the funeral home from 6 to 8:00 PM on Friday and from 10 to Noon on Saturday. Condolences may be sent to www.rogerwdavisfuneralhome.com. 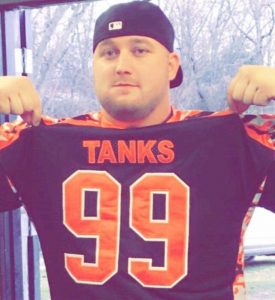