Ella Jane Peterman, 67, of Portsmouth, passed away Sunday, October 10, 2021 in Portsmouth with her family by her side. She was born March 7, 1954 in Columbus, a daughter of the late Philomena Bernadine McCafferty White and George Henry Fawbush.

A very loving and caring mother and grandmother, Ella was a homemaker who enjoyed spending time with her family. She had been a member of the Moose and Eagles Lodges.

She was preceded in death March 13, 2011 by her husband, George William Peterman, whom she married in Portsmouth; and a daughter, Ella Deborah Jean Peterman.

Funeral services will be held at 2 P.M. Wednesday at the Ralph F. Scott Funeral Home in Portsmouth with Brian Holbrook officiating.

The family will receive friends from noon until the funeral hour Wednesday. 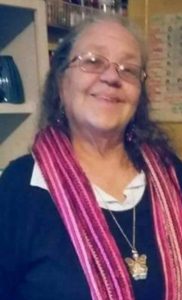