Christopher Andrew Livingston, 55, of Portsmouth, passed away Tuesday, October 12, 2021, at the OSU James Cancer Center in Columbus after a brief battle with pancreatic cancer. Chris was born December 31,1965, in Portsmouth, a son of Patricia Marlene Livingston, who survives, and the late Roger Lee Livingston.
Chris was a graduate from Portsmouth High School in 1984 and he had worked as an ironworker.
In addition to his mother, Pat Livingston, of Portsmouth, Chris is survived by his son, Christian Alexander “Alex” (Nicole) Livingston of Liberty Township; two grandchildren, Kayden and Ava Livingston; four siblings, Robin (Dustin) Miller of Portsmouth, Michael (KerriAnn) Livingston of Wheelersburg, Ryan (Avory) Livingston of Matthews, NC and Tyler Ann (Tyler) Hollar of Wheelersburg; several nieces, Jayna (Scott) Lasswell, Kaitlin Livingston, Katherine Middaugh; nephews Connor (Courtney) Lasswell, Collin Livingston, Phoenix Book Hollar, Charley Livingston, Griffen Hollar; great-nephews, Dalton Lasswell, Remington Harris and Rowan Caid; great-niece Sophie Harris; and many special cousins, especially Lynda Davis, who held a special place in his heart. Last, but definitely not least, his best “fur-son” Geronimo, who you always saw together with Chris.
To know Chris, or “Shlep” to many, was to love him. He was a man of many jokes and a special human with the kindest, most loyal disposition. It had been said many times that he would have given his shirt off his back to anyone in need and that always stood true.
Chris spent his days doing what he loved. He was an avid card player and winner of many games. He enjoyed long rides on his motorcycle and spending time with his friends. Most who knew Chris would know of his struggle with sobriety throughout most of his life. What some may not know is that Chris had fought his battle and WON! Chris had been sober for over 2 years, something that he was proud of. He enjoyed sharing his rehabilitation testimony with others and held a special place in his heart for Port 45 Recovery, their team, and the many lifelong inspirational friends that he met while attending.

We are so thankful for all of his hard work which gave us all the memories that we had, at one time, only wished for. His work was truly remarkable and we are so very proud of him. We hope that anyone who reads this can find someone to ask about his testimony, it’s worth the listen. To the families of those with loved ones struggling with substance abuse, do not give up hope. We have help here locally and they are professional, supportive and continue to change
the lives of many. Chris made so many gains over the years and was there to help take care of his Father when he needed it most. We will forever be thankful for what his sobriety gave to not only him, but also us.

The family will receive friends Friday from 5 to 8 P.M. at the Ralph F. Scott Funeral Home in Portsmouth. There will be a brief time of sharing at 8 P.M.

Memorial contributions may be made to Sierra’s Haven for New & Used Pets at sierrashaven.org or 80 Bierly Rd. Portsmouth, OH 45662 and the Pancreatic Action Network at pancan.org. 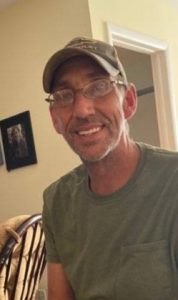