Lewis Sven Rayburn, 81, of Dublin, formerly of Portsmouth, died in Georgetown at the Ohio Veterans Home, after suffering from Alzheimer’s Disease for many years, on Thursday, October 7, 2021.  He was born January 30, 1940 in Portsmouth to the late Enoch Rayburn and Katherine (Poetker) Rayburn.

In addition to his parents, he was preceded in death by his wife, Marsha (McMullen) Rayburn.

Lewis was a 1958 graduate of Portsmouth High School, he stayed in touch with former classmates and was always involved in reunions and class get-togethers.  He was a veteran of the Navy and served during the Cuban Missile Crisis on the USS John R. Pierce, DD-753.  Lewis worked for the Borden Dairy Company as Elsie the Cow’s, promoter and manager. He was also a devout member of The Church of Jesus Christ of Latter Day Saints.

Lewis is survived by his two children; a daughter, Katherine Elizabeth Rayburn Schiavo and son-in-law Franzis Schiavo, of Scottsdale, AZ, a son, Trevor Lewis Rayburn, of Dublin, a sister, Nancy Carroll, of Columbus, a brother-in-law and sister-in-law, Don and Mary McMullen, of Canal Winchester, a grandson, Wolfgang Sven Schiavo, of AZ., as well as nieces and nephews

Funeral services will be 11:00 AM, Tuesday, October 12, 2021 at The Church of Jesus Christ of Latter Day Saints, 1205 Bierly Road in Portsmouth with Bishop Gale Beaman officiating. Visitation will be 5:00 PM – 7:00 PM, Monday, October 11, 2021 at Melcher Hammer Funeral Home in Portsmouth.  Burial will follow at Scioto Burial Park in McDermott where graveside military rites will be provided by the American Legion, James Dickey Post #23.

In lieu of flowers, the family request contributions be made to the Ohio Veterans Home Volunteer Committee, 2003 Veterans Blvd Georgetown, OH 45121 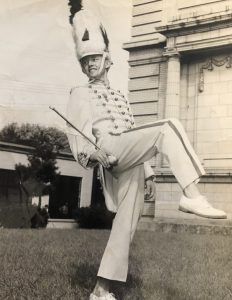