The world became just a little bit darker on September 28, 2021 when Ardith Abrams Scott McFann of McDermott passed away. Her love for life, kindness, compassion were only surpassed by her love for family and desire to serve the almighty God. Ardith joined the Worldwide Church of God in 1971 and later transitioned into the United Church of God. She devoutly served God and prepared herself for Christ’s return for 60 years.

She later married her second husband, Arthur McFann. They loved and served each other unselfishly for 11 years. They were loved and respected by all who knew them. Arthur also passed on September 28, 2021 less than 10 hours after Ardith. She is survived by five children, Brian Scott of Minford, Beth Ann Scott of Wheelersburg, Dale Scott of McDermott, Delbert Scott of Peebles, and Linnea Mahlman of Chillicothe, she is also survived by her son in laws Andrew Mahlman, Sam Doss, Timothy Porter and a daughter in law Joyce Scott, 4 grandchildren, Nathan Doss, Jonathon Scott, Jesse Scott, and Misty Scott, 2 brothers, Gary (Laquita) Abrams of Lucasville, Donald (Rose) Abrams of West Portsmouth, 2 sisters, Darlene (Jim) Call of McDermott and Janie Teeters of Portsmouth, along with several nieces and nephews.

A private double memorial service will be held for Ardith and Arthur at the Roger W. Davis Funeral Home in West Portsmouth with Kevin Call officiating. Condolences may be sent to www.rogerwdavisfuneralhome.com 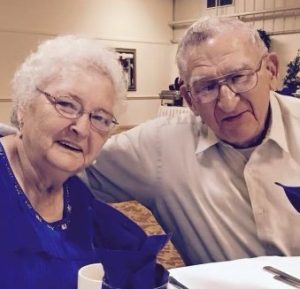