Jim served 20 years with the U.S. Air Force, retiring as a SMSgt.  For his service, he was awarded the Air Force Commendation Medal with 1 Oak Leaf Cluster, Vietnam Service Medal with 3 Stars, Republic of Vietnam Campaign Medal, Air Force Longevity Award with 4 Oak Leaf Clusters, the Air Force Good Conduct Medal with 3 Oak Leaf Clusters and the Small Arms Expert Marksmanship Ribbon. He served with the Strategic Air Command and while serving as an aircraft engine repair instructor at Chanute AFB, where he earned the nickname “Jimmy Jet”. He owned Greenhill’s Bible and Art Supplies, where he sold art supplies, Christian books and gifts and taught art lessons in Rantoul, IL. A multi-faceted man, he had many interests in addition to art and sculpting. A serious adventurer and traveler, he enjoyed flying ultralight aircraft and he was an avid motorcycle enthusiast. He and his late wife, Linda, spent many hours travelling the country in their RV, enjoying camping along the way. The couple attended Cornerstone United Methodist Church when they resided in Portsmouth.

In lieu of flowers, contributions may be made to Sierra’s Haven for New & Used Pets, 80 Easter Dr., Portsmouth, OH 45662. 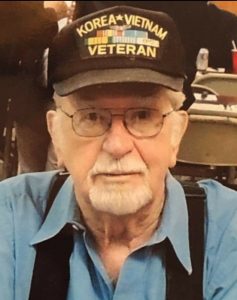