Mike was born on November 7th, 1941 in Portsmouth to Pete and Dora Kessinger. A graduate of Portsmouth West High School Class of 1959, Mike attended Wilmington College before embarking on his lifelong profession in sales, a profession that he greatly enjoyed until his retirement having finished his career as owner of Standard General Supply in Portsmouth.

Visitation will be held Friday September 10th, 4 PM to 6 PM at FC Daehler Mortuary Company, 915 Ninth Street, Portsmouth with a service immediately following at 6 PM. The Reverend Allison T. Bauer will be officiating.

Dad, you now have the best view one could imagine so you can watch the Buckeyes on Saturdays!

To send flowers or a memorial gift to the family of Paul “Mike” Michael Kessinger please visit our Sympathy Store. 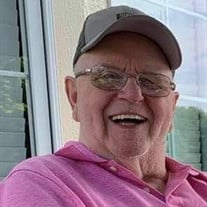