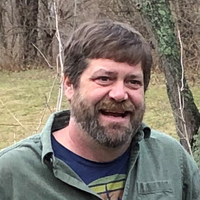 Eric Jason Greene, 43, of Chillicothe, Ohio passed away Tuesday, August 31, 2021 at his home, surrounded by family and friends after a short battle with cancer.  He was born February 10, 1978 in Chillicothe to Gary and Joyce Bucy Greene of Waverly.  On October 2, 2016 he was united in marriage to Hannah Wilson Greene who survives.  Also surviving are a son, Arlo Greene; two step sons, Connor and Lucas Murray; a brother, Scott Greene of West Palm Beach, Florida; an aunt, Janice Greene of Waverly; and many close friends.  He was preceded in death by his grandparents, Homer Greene and Anna Greene Knechtly and Wilbur and Imogene Bucy; and an uncle, Bobby Greene.

Eric was a 1996 graduate of Waverly High School. He worked for the United States Postal Service in Chillicothe as a rural mail carrier for over 20 years.  He was a member of the Ross County Conservation League and a former member of Big Scioto and The Gypsy Jug Band.  Eric loved all outdoor activities.

Funeral services will be held at 3:00 p.m. Saturday, September 4, 2021 at Botkin Hornback Funeral Home in Waverly with Pastor Dale Reed officiating.  Burial will follow in Evergreen Union Cemetery on Denver Road in Waverly.  The family will receive friends from 1:00 p.m. until the time of the service at the funeral home.