Preceded in death besides her parents are one son, John E. Richards, brother, John P. Cooper.

Funeral services will be held Sunday, Aug. 22, 2021 at the Roberson Funeral Home in South Shore, KY with Aaron Reed, officiating. Burial will follow in Siloam Cemetery, South Shore, Kentucky. Friends may call at the funeral home from 11 a.m. till the service hour at 1 p.m. on Sunday. 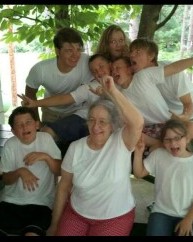