Bill proudly served his country in the United States Army in WWII. He was retired from Goodyear Atomic Corporation and Martin Marietta Corporation after 35 ½ years.  He was a member of Piketon United Methodist Church, Orient Lodge #321 F & AM, Scottish Rite, Aladdin Temple Shrine, and Pike County Shrine Club where he was Shriner of the year.  He was a charter member and commander of V.F.W. #9772 at Mt. Orab, a member of American Legion Merritt Post 142, Piketon Athletic Boosters and Piketon Fire Department. Bill enjoyed fishing on Manitoulin Island.

Masonic services will be 11:30 a.m. on Monday, August 9, 2021 with funeral services to follow at Botkin Hornback Funeral Home in Waverly.  Burial will follow in Mt. Orab Cemetery at approximately 2:00 p.m. Family will receive friends from 10:00 a.m. until the service time at the funeral home. 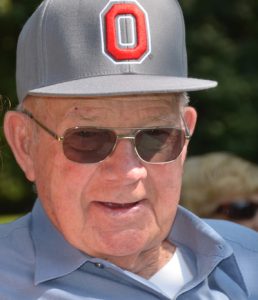