Clarence Harwood Canter, 89 of Portsmouth passed away Monday, July 26, 2021 at his residence. Born February 27, 1932 in Minford, a son of the late Clarence and Maguerite Stockham Canter, he was retired from Goodyear Atomic Plant as Captain of Security and owned & operated Canter Greenhouse. He was a member of Lucasville Masonic Lodge #465 and Madison Missionary Baptist Church where he was a Deacon.

He is survived by his wife of 71 years, Barbara Lou Davis Canter; two daughters, Diane Slone, Debora Lynn Canter; one son, Douglas Canter; nine grandchildren; ten great grandchildren, and one brother, Paul Michael Canter. In addition to his parents, he was preceded in death by one brother, Billy Joe Canter and one sister, Shirley May.

Funeral services will be conducted at 1:00 p.m. Saturday, July 31, 2021 at Madison Missionary Baptist Church with Pastor Don Noel officiating. Burial will be at Canter Wells Cemetery. Friends may call at Erwin-Dodson-Allen Funeral Home in Minford from 5:00 to 7:00 p.m. Friday and one hour prior to the service on Saturday at the church. Online condolences may be sent to www.edafh.com. 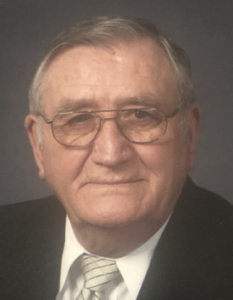