Cindy was a graduate of Portsmouth West High School, where she was active in the band and played Claranet. She received her Bachelor’s in Education from Ohio University. She was a teacher for over 30 years with the Portsmouth City School System, before that she taught at Happy Hearts, which is now Vern Riffe School., She taught special education and loved making a difference in the lives of others. She was active in her church, Second Presbyterian Church. She played in the Hand Bell Choir, was active in the women’s association, the Deacon’s and was often called upon to usher, head count or help out in other ways.

Funeral services will be 1:00 PM Thursday July 15, 2021 at the Roger W. Davis Funeral Home in West Portsmouth with Reverend Allison Bauer officiating and interment in Sunset Memorial Gardens. Friends may call at the Funeral home on Thursday starting at 11:00 AM. The family requests in lieu of flowers, donations be made to the Harry R. James Scholarship Fund or the Second Presbyterian Special Music Fund. Condolences may be sent to www.rogerwdavisfuneralhome.com. 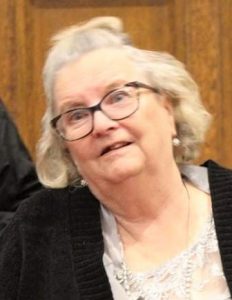