Austin Boggs Bryan, 20 of South Shore, KY passed away surrounded by his family July 11, 2021 at Kings Daughter Medical Center in Ashland, KY. He was born in Portsmouth, Ohio November 22, 2000, a son of Richard and Amy Potter Bryan. Austin was a kind-hearted, hard-working, thoughtful, adventurous and outgoing young man. He enjoyed late model dirt track racing and riding dirt bikes. He was also the world’s greatest trader.  He was employed with his father as a concrete finisher and also a Landscaper.

He was preceded in death by his Grandfather’s Gary Potter and Mark Mobley, cousins, Michael Branham and Benjamin Michael.

Funeral Services will be held at 1pm Friday, July 16th 2021 at the Roberson Funeral Home in South Shore, KY with Drew VanBibber, officiating. Burial will follow in Siloam Cemetery, South Shore. Friends may call at the funeral home on Thursday, July 15th, 2021 from 6-8 pm and one hour before the service time on Friday. 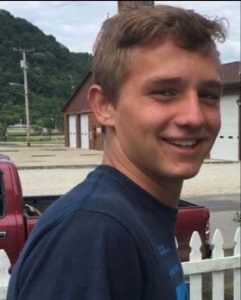