She was a lifetime member of Sciotoville Christian Church, and was married there December 1, 1944, to Charles E. “Chuck” Abbott, who preceded her in death May 5, 2014. Together they owned and operated the former Abbott’s Grocery Store in Sciotoville, and Linda also worked at the former Millhuff’s Grocery and Department Store.

Services will be held 11:00 AM Monday April 26, 2021, at the Edgewood Abbey Mausoleum at Memorial Burial Park, with Steve Falls officiating, with interment to follow. Memorial donations may be made to the Sciotoville Christian Church. Arrangements are under the direction of the Roger W. Davis Funeral Home in West Portsmouth. Condolences may be sent to www.rogerwdavisfuneralhome.com. 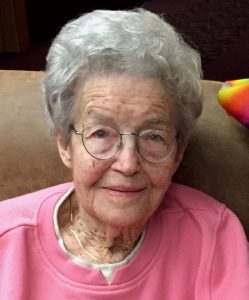