In addition to her parents, she was preceded in death by an infant son, Robert Wolfe, and brothers; Roy, Thomas, Billy, and Lloyd Douglas Hobbs.

Funeral services will be 1:00 PM, Saturday, April 17, 2021 at Melcher Hammer Funeral with Pastor Sheila Hobbs officiating.   Jean’s niece, Christy Parker, will be singing at the funeral. Burial will follow at Sunshine Ridge Cemetery in Blue Creek.  Visitation for friends and family will be from 12:00 noon until time of funeral on Saturday. 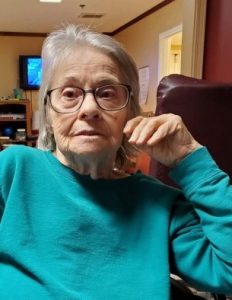