Mary Ann (Ruth) Adams, 91, of Portsmouth, died Friday, April 9, 2021 at SOMC
Hospice in Portsmouth.
She was born June 6, 1929 in Portsmouth, to the late Otto C. and Catherine
(Sweeney) Ruth.
Mary Ann was a lifelong member of St. Mary’s Catholic Church, was very proud
of her Irish decent. She was an avid Cincinnati Reds and Ohio State Buckeyes fan
and loved her Notre Dame Fighting Irish.
In addition to her parents, she was preceded in death by her husband, Carl Franklin
Adams, whom died on June 28, 2015, they were married for 65 years, a brother,
John Patrick Ruth, a sister-in-law, Patricia Ruth, and a son-in-law, Kenneth
Llewellyn.
She is survived by her six children; Tom Adams (Jane) of Chillicothe, Michael
Adams (Peggy) of Chillicothe, John G. Adams (Kathy) of New Boston, Mark
Adams of New Boston, Mary Barbara Davis (Jim) of West Union, and Cathy
Llewellyn of Portsmouth, eleven grandchildren; Heather, Jacob, Chris, Sonia,
Stephanie, Matt, Michael, Jennifer, Tracy, Stacy, and Johnny, and 24 great-
grandchildren. She is also survived by six nieces and nephews; Mary Pat Hershman, Tim Ruth,
Mike Ruth, Kathryn Meksto, Maureen Gordon, and Julie Moran.
Funeral services will be 2:00 P.M. Monday, April 12, 2021 at Melcher Hammer
Funeral Home in Portsmouth with Rev. Joseph Yokum officiating. Burial will
follow at Greenlawn Cemetery.
A visitation for friends and relatives will be on Monday, from noon until time of
service at 2:00 P.M.
The family would like to give a special “Thank you” to Mary Ann’s two children,
Mark and Cathy, for the exceptional care they gave their mother.

And also their cousin, Rita McMackin Ugrin, she faithfully visited with communion, goodies and great company. It was a blessing to our mother.
In lieu of flowers, donations can be made in memory of Mary Ann to SOMC
Hospice. 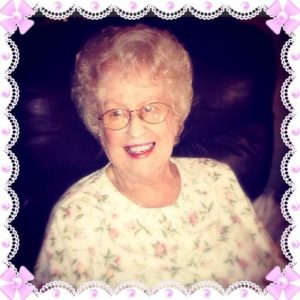