Judith Ann Rowson, 77, of Portsmouth, passed away Thursday, April 8, 2021 at her home. Judy was born December 17, 1943 in Portsmouth, a daughter of the late Larry & Lorraine Gowdy Cook.

A 1961 Portsmouth High School graduate, Judy was a member of Cornerstone United Methodist Church. She had worked at the former Portsmouth Banking Co., for the N&W Railway Co. (later Norfolk Southern Railway Co.) and at the Scioto County Courthouse. An avid tennis player and Life Center pickleball player, Judy loved to travel. She especially enjoyed the annual girls’ cruise with her daughters and granddaughter.

In addition to her parents, Judy was also preceded in death by maternal grandparents who reared her, Brooks and Alta (Coriell) Gowdy.

Funeral services will be held at 1 P.M. Monday at the Ralph F. Scott Funeral Home in Portsmouth with Rev. John Gowdy officiating and interment in Memorial Burial Park.

The family will receive friends at the funeral home from 11 A.M. until the funeral hour. Masks will be required in accordance with local health regulations. 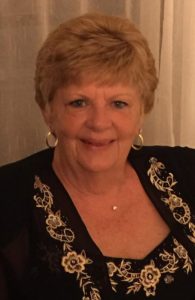