Betty Ruth Evans, age 96, of 502 Walnut Street, Waverly, Ohio died on Thursday, January 21, 2021 at her residence.  She was born on September 19, 1924 in Ridgeville, Indiana to the late Herb and Edith Adams.  On August 3, 1943 she was united in marriage to Carl David Evans who preceded her in death on May 6, 2010.  She was the mother of one son, John Evans of Waverly, Ohio who preceded her in death; two daughters, Nancy Shea of Waverly, Ohio and Linda and Rod Hardwick of Dunkirk, Indiana.  In addition to her daughters surviving is one daughter- in- law; Susan Evans, eight grandchildren, twenty great grandchildren and five great great grandchildren.  In addition to her husband, son and parents, Betty was also preceded in death by one sister and a son-in-law, Rodney Shea.

Betty was a precious blessing of the family.  She was a faithful member of Sovereign Grace Church in Chillicothe.

Funeral services and calling hours will not be observed.  Arrangements are under the direction of Botkin Hornback Funeral Home in Waverly. 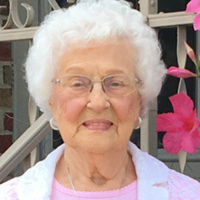