Reverend Charles Edward Adkins Sr. of Waverly, Ohio, went to be with the Lord, October 11, 2020 at 7:25pm, on Sunday evening.  He was born in Pikeville, Ky. on September 30, 1935 to the late Arthur and Amby Allen Adkins.  Charles was a retired Minister where he taught the love of Christ to countless people.  He was also a United States Marine Veteran and member of Apostolic Churches International.  Along with his parents, Charles was preceded in death by 2 sons, Anthony and Randall Adkins, and a brother, James Adkins.

Funeral services will be 11:00 AM Wednesday, October 21, 2020 at the Roger W. Davis Funeral Home in West Portsmouth with Rev. Tom Peters and Rev. James Corkran officiating.  Interment will be in Scioto Burial Park with Military graveside rites performed by James Dickey Post 23 American Legion.  Friends may call at the funeral home from 6 to 8:00 PM on Tuesday and one hour prior to the service on Wednesday.  Condolences may be sent to www.rogerwdavisfuneralhome.com. 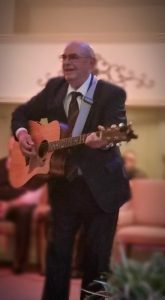