James Hays (Stage Name-James Hayes aka Taylor Hayes) Of Portsmouth, Ohio took his last bow on this earthly stage on October 15th, 2020 and has been called to his next major acting and directing job in Heaven. He was born on March 16th, 1939. He is preceded in death by his late wife Marian Hart and His partner Lori Tipton and his parents Thornton and Ruth Taylor Hays and an Older brother Charles Thornton (Marcella) Hays of Springfield, Ohio.

James Hays is a graduate of American High School Lansing ILL and went to Pasadena Playhouse School of Performing Arts Class of 1965 and The Jesters Playbox, East L.A. Community College. He has a bachelor’s degree in history from Shawnee State University and master’s in fine arts at Goddard College in Vermont. He started preforming at an early age on WBEX radio station in Waverly, Singing and acting at local parks in theaters programs. He worked as a Director at John B. Rogers Company from 1967-1990, He also Started his own company called Unicorn Players from 1971-1996 in Las Angeles California as an Actor/Director and writer. James Hays is part Screen Actors Guild and the American Federation of Television and Radio Artists and the Actor Equity Association. Furthermore, he was also A professor in theater at Shawnee State University teaching his craft. He also Directed and acted in plays at Portsmouth Little Theater and was on the board from 2009-2013. Throughout his many years in Hollywood James (Jim) Hays has been in over 250’s movies, tv shows, commercials and Directed over 200 Theater shows in his life.

He is survived by his Sister Betty Louise Hays (Bill) Brewster of Piketon, Ohio and Son Ryan (Sierra) Adams of Sciotoville, Ohio. A Daughter Laura Adams ( Thom ) Young and 11 Grandchildren, Elijah Adams, Isaiah Adams, Trevor Cain, Zackary Cain, Angel Young, Ethan Young, Mason Young, Parker Rister, Marcy Rister, Daisy Rister, Martina Rister and 7 Nieces and Nephews and many great Nieces and Nephews and Cousins who will miss his passion for life and how it lit up a stage when he came on it. He has touched so many lives and will be missed and cherished by many more but as my dad would say “The Show Must Go On!”

Upon request from James Hays himself there will be no funeral service or viewing. Instead of flowers or cards please donate to the local theater program of your choice.

To send flowers to the family or plant a tree in memory of James Taylor Hays, please visit our floral store. 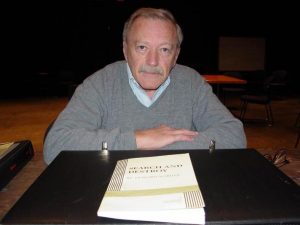