Harold Dean White, 89, of Portsmouth passed away Friday, September 25, 2020 at SOMC Hospice due to complications from Parkinson’s and COPD. Born June 12, 1931 in Los Angeles, CA, son of the late Calvin and Esther Thompson White, he was a U.S. Marine Corps. Veteran during the Korean Conflict and was the top marksman of his platoon. Harold worked with Dan Gurney and Carroll Shelby in their garage and was on the crew for two 24 hour of LeMans winners. He was a member of the crew for Bobby Unser’s Indy Car that won the 1968 Indianapolis 500. Harold serviced and did ground up restorations of vintage Ferrari’s, and was 1 of 7 Americans at the time that were authorized by the Ferrari Factory to do so. Harold and Joyce travelled extensively all over the world, two of their favorite places were Istanbul, Turkey and the Holy Land.  The world has lost a great storyteller and a most generous spirit. He will also be sorely missed by his two furry friends, Jake and Callie.

He is survived by his wife, Joyce Logan White; one son, Robert (Sheri) White of California; four grandchildren, Andrew, Stephanie, Ashley, Adam; one brother, Bill White of Nevada, and one sister, Barbara Murphy of Hawaii. In addition to his parents, he was preceded in death by one son, Donald White and one sister, Ellen.

Funeral services will be conducted at 7:00 p.m. Tuesday, September 29, 2020 at Erwin-Dodson-Allen Funeral Home in Minford. Burial will be at Universal Cemetery in Rubyville. Friends may call at the funeral home from 5:00 to 7:00 p.m. Tuesday prior to the service. A graveside service will be held at the funeral home due to COVID restrictions and CDC guidelines. Military graveside rites will be conducted by James Irwin Post No. 622 American Legion and William A. Baker Post No. 363.  Online condolences may be sent to www.edafh.com. 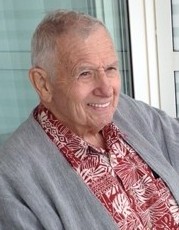