Colleen Elizabeth Rafalowski, 52, of New Boston passed away Thursday, August 27, 2020 at her residence. She was born February 20, 1968 in New Jersey, a daughter of the late Barbara Hiles and was a homemaker. She is survived by her husband, Terry Rafalowski, Sr.; one daughter, Holly Rafalowski; one son, Terry “TJ” Rafalowski, Jr.; one brother, Shaun Hiles, and one sister, Jennifer Hiles. In addition to her mother, she was preceded in death by one son, Michael Rafalowski, and one brother, Frank Hiles.

Graveside services will be conducted 11:00 a.m. Friday, September 4, 2020 at Mt. Carmel Cemetery in Minford. Arrangements are under the direction of Erwin-Dodson-Allen Funeral Home in Minford. Online condolences may be sent to www.edafh.com. 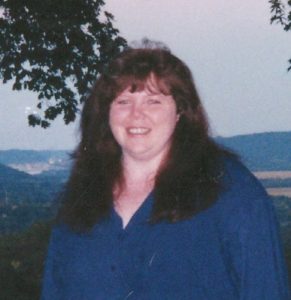