Larry Eugene “Big O” Oyer, 76, of Waverly, Ohio passed away Tuesday, June 2, 2020 at the University of Cincinnati Hospital.  He was born April 1, 1944 in Ross County, Ohio, son of the late Carl Eugene and Dorothy Ann George Oyer.  On August 30, 1964 he was united in marriage to Marjorie Durbin Oyer who preceded him in death on May 23, 1994. On December 30, 1997 he was united in marriage to Kathy Claytor Ferguson Oyer who survives.

Larry was a member of Orient Masonic Lodge #321, Aladdin Shriners, American Legion Post #142, Eagles Lodge #2227, Moose Lodge # 2263, thirty year member of SPFPA Union and Omega United Methodist Church.  He was a 1963 graduate of Waverly High School. Larry retired in 2005 from USEC, Martin Marietta, Goodyear Atomic Plant as a security Guard.  He was a Waverly Police Officer from 1964-1975, serving as a corporal of the department.  Larry was a strong, loving, encouraging and supporting man.  He loved his family and his dog Nikki.  He enjoyed cooking, fishing, hunting, camping, woodworking and animals.

Funeral services will be 1:00 p.m. on Monday, June 8, 2020 at Botkin Hornback Funeral Home in Waverly.  Burial will follow in Evergreen Union Cemetery on Bridge Street in Waverly.  A Masonic service will be held at 12:30 p.m. prior to the funeral service. Family will receive friends from 11:00 a.m. until the time of service on Monday.

There will be a dinner following the burial at the American Legion in Waverly. 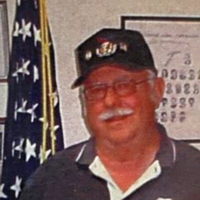