James “Jim” Walter Staker, 86, of Portsmouth,  died Friday, May 29, 2020 at the SOMC Hospice House at the age of 86.  Born November 6, 1933, the second of three sons, to Willard A. and Edith (McCarty) Staker in Portsmouth, Ohio where he lived his whole life as a son, husband, father, community servant and prominent businessman.
Jim married the girl he had loved since he was 11 years old, Sally Ann Cohen on June 27, 1954.  They made a life together in their shared hometown for over 65 years, most of that time in the home they built together on Woodridge Way.  They have two daughters, Jamie (Brian) Noble and Jennifer (Terry) Johnson.  His family was his joy and he was so blessed to have three grandchildren whom he adored, Jordan (Jonathan) Page, James “Tye” Johnson, and Nick Johnson as well as two great-grandchildren, Sky Adkins and Zayne Page.  He will be greatly missed by them all.
He attended Lincoln Elementary School and graduated from Portsmouth High School in 1951.  He attended The Ohio State University and graduated from the College of Pharmacy in 1956, serving as President of Rho Chi Honorary Fraternity.  Jim was a member of Phi Sigma Kappa and Phi Delta Chi Pharmacy Fraternity.  He obtained the highest grade recorded at the time when passing his Pharmacy Boards.
Mr. Staker retired in 2005 as President and CEO of Staker’s Service Drugs, Inc., a family owned and operated chain of three pharmacies in the Portsmouth area after a nearly 50 year career.  He loved his profession and became a well-known figure in his starched white coat, dispensing prescriptions and healthcare advice from behind the pharmacy counter.  Integrity and care were the center of his life and his business, treating customers, employees, and friends with the love of a family.
He was active in both retail and long-term care pharmacy, was a member of the Ohio Pharmacists Association, serving on its Board of Governors, the National Association of Community Pharmacists and was a fellow of the American Society of Consultant Pharmacists.  Mr. Staker was the 1992 Bowl of Hygeia award recipient, recognizing pharmacists who demonstrate outstanding civic leadership in their communities.  It is considered one of pharmacy’s most prestigious awards.
Mr. Staker was a member of the OSU Advocates and served two terms on the Governing Board of the OSU College of Pharmacy Alumni Association, and was a member of the OSU College of Pharmacy Deans Corporate Council for 12 years.  He was awarded the Distinguished Alumni Award in 1999.
Jim was an active member of his community.  He was a member of the Portsmouth Rotary Club serving as President in 1980-81 and was a Paul Harris Fellow.  He served on the Shawnee State University Development Foundation Board, the U.S. Bank Board of Directors for the Tri-State Region, and the Southern Ohio Medical Center Board of Directors.
He was a lifetime member of the Elks, a lifetime member of the Ohio State University Alumni Association, and a 60 year member of the Masons, Aurora Lodge.   He was an avid golfer and enjoyed golfing at the Elks Country Club with his many, many friends.  Jim was also an avid Ohio State football fan, attending nearly every home game since his graduation from OSU in 1956.  He loved tailgating with friends before the games in the parking lot next to St. John’s arena, watching for the BDBITL to make its trek to the Shoe.  He shared his love of the Buckeyes with his family, leaving his children and grandchildren in particular, with many fond memories.  It was said that he could not donate blood because it always came out scarlet and gray.
Jim was a lifetime member of First United Methodist Church prior to the merger of four local churches in 2002.  He served in many leadership roles and as a Sunday School teacher.  He was a charter member of Cornerstone United Methodist Church, serving on the merger and building committees and was a leader of the capital campaign.  We are comforted to know that he rests in the arms of our Lord Jesus Christ until we see him again.
He was preceded in death by his parents, his brothers Willard E. (Bill) Staker and R. Thomas (Tom) Staker, and a nephew Kenneth B. Staker.  He is survived, in addition to his immediate family listed, by his nieces and nephews Stephen James Staker, Jeri (Larry) Newman, and Cindy (Kevin) O’Connor, Troy (Jennifer) Staker, Chris (Kris) Staker, and a favorite cousin Howard Staker, along with many special friends and neighbors.
Funeral arrangements are under the direction of the F.C. Daehler Funeral Home.  Due to pandemic restrictions, a private family ceremony is planned.  In lieu of flowers, donations can be made to Cornerstone United Methodist Church or the SOMC Hospice House.  Please visit www.fcdaehlermortuary.com to leave online condolences. 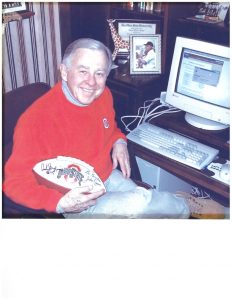