Edna Arnett, 96, of Portsmouth, went to be with her Lord and Savior on Sunday, April 26, 2020, at Portsmouth Health & Rehab. She was born February 14, 1924 in Leander, Johnson County, KY, a daughter of the late Leck and Flaura Collins Conley.

Edna worked as a cook with the Portsmouth City Schools for 20 years. She was a former Neighbor to Neighbor volunteer and a longtime member of Christians Beyond Church (formerly Central Baptist Church) and it’s Faith Crusaders Class. Edna was a graduate of Lewis County High School in Kentucky.

Preceding her in death September 19, 1979, was her husband, Grover Cleveland Arnett. The couple were married in 1949 in Portsmouth.

Friends are encouraged to leave messages of love and support for the family that will be displayed during the funeral services. Please leave your messages at RalphFScott.com. 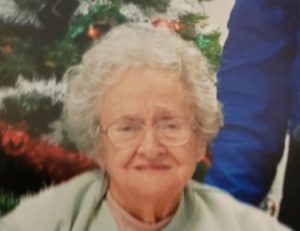