Paul Ralph Crabtree, 85 of Lucasville passed away on Wednesday, April 1, 2020 at Southern Ohio Medical Center Hospice.  He was born on April 7, 1934 to the late Clarence Esto and Rosie (McClary) Crabtree.  On May 9, 1988 he was united in marriage to Brenda (Gibson) Crabtree who survives.  In addition to his wife he is survived by one son, Ronald (Renee) Crabtree of Chillicothe; two daughters, Angela (James) Barrett of Ashland, Kentucky and Regina (William) Mahle of Mentor; two step-sons, Steve Dodson of Columbus and Scott (Michelle Turner) Dodson of Pinnacle, North Carolina; 11 grandchildren, 21 great grandchildren and 2 great-great grandchildren, one brother, Rodney (Kathy) Crabtree of Lucasville: two sisters, Betty Chambliss of Otway and Grace Cassidy of McDermott.  In addition to his parents, Paul is preceded in death by two sons, James Robert Crabtree and Kent Lee Crabtree, two sisters,  Genevieve Crabtree and Lillian Altman and four brothers, Clarence Crabtree, James Crabtree, Curtis Crabtree and Infant Boy Crabtree.

Paul was a graduate of McDermott High School and a graduate of Ohio University Southern Campus.  He worked for Empire Detroit Steele, Waller Brothers Stone Company and was a Corrections Officer at Southern Ohio Correctional Facility before retiring on July 31, 2007.  During his time as a corrections officer he was awarded the honor of being the Officer of the Year for the State of Ohio.  He was a member of the Community of Christ Church.  During his retirement he enjoyed gardening, doing lawn care, going to swap days, watching racing, Ohio State University sports, the Cincinnati Reds and the Cincinnati Bengals.

Private family services will be held at the Botkin Hornback Funeral Home in Otway.  Private graveside services will be at Rockwell Cemetery at 2:00 P.M. on Saturday April 4, 2020 with Pastor Douglas Altman officiating. 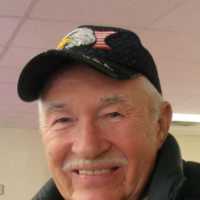