He was born March 31, 1945 in Columbus, Ohio to the late James Robert Cochran and Ruth Marie Paul.  He is survived by a son, Michael Cochran of Charlottesville, Virginia; two daughters, Dianna Smith and Erin Trost both of Charlottesville; and two grandchildren.  In addition to his parents he was preceded in death by a brother Jerry Cochran.

Barry was a former Technical Writer and a Security Officer.  He recently became a member of Saint Mary’s Queen of the Missions Catholic Church in Waverly. He proudly served his county as a Staff Sergeant in the United States Army and the United States Air Force.  He was a Past Commander of the American Legion, a member of the Moose Lodge, the Honor Guard, and Orient Lodge #321.  He was a graduate of Shawnee State University and Ohio University.

A private graveside service will be held Thursday at Omega Cemetery with Father William Hahn, Celebrant. Military honors will be conducted by American Legion Post #142.  Arrangements are under the direction of Botkin Hornback Funeral Home in Waverly. 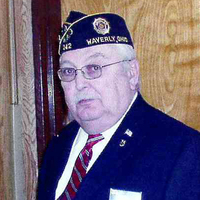