Lovella Litz, 89, of West Portsmouth went to be with the Lord Sunday, January 19, 2020 at Hill View Retirement Center in Portsmouth. She was born March 11, 1930 in West Portsmouth to the late Cecil Edward and Fannie M. Deemer Porter.

Lovella was a retired secretary at Dry Run School and volunteered for many school activities. She was a part of various Republican organizations: Past President of the Scioto County Republican Club and Vice President of the Women’s Republican Club. She was also a member of Nauvoo United Methodist Church and a member of the Eastern Star, Portsmouth Chapter 424. Lovella was a big part of the Roger W. Davis Funeral Home’s “Tree of Remembrance Service” since its inception in 1993, helping to make the special bows for families and passed out the angel ornaments at the service.

Along with her parents, Lovella was preceded in death by her husband, James E. Litz, a son Dennis J. Litz, a brother, Edward A. Porter and her twin, Louella Mitchell.

Funeral services will be 1:00 PM Thursday, January 23, 2020 at the Roger W. Davis Funeral Home in West Portsmouth with Pastor Pete Shaffer officiating and interment in Scioto Burial Park. Friends may call at the funeral home from 5 to 8:00 PM on Wednesday with an Eastern Star service starting at 8:00 PM conducted by Lucasville Chapter 495 of the Eastern Star. There will also be visitation one hour prior to the service on Thursday. Condolences may be sent to www.rogerwdavisfuneralhome.com. 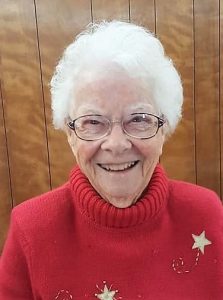