Current 2ndWard Councilwoman Charlotte Gordon is running as a write-in candidate in order to retain her seat this November. Gordon was appointed to the seat in August after former councilwoman Jo Anne Aeh resigned.

Gordon has acted as the Artistic Director for the Southern Ohio Museum since 2013. She has lived in Ohio since the late 80s, but originally grew up in New Orleans, Louisiana.

“I am a museum professional with a master’s degree in museum studies,” explained Gordon. “I’ve been in Ohio for a while now. The Southern Ohio Museum always had a very high profile in the museum community in Ohio. It is looked at as a small but very strong museum. The collection there is top notch.” Gordon, and her husband Mark, had worked with closely with the Southern Ohio Museum before moving to Portsmouth. “That’s what brought us here,” she said. “We knew people so we decided to move here and we haven’t looked back since. It’s been a fun experience.”

The councilwoman says at first her friends and family were puzzled as to why she moved to Portsmouth.

“It’s such a comfortable city to live in. People here are very honest. There are no hidden agendas. People say what they mean and they mean what they say. And it doesn’t hurt that I wake up every morning admiring the view of the beautiful Appalachian hillside.”

Gordon hopes to bring her experience in museums and community building to the city council going forward.

“I really view museum work as community building work,” said Gordon. “And that’s what being on council is, too- community building. I’ve met with lots of people. I’ve had lots of conversations. And I get to support people as they do what they do best. But people sometimes ask me, ‘what would I do to change my ward?’ I don’t just want to change it. I want to listen. I really do consider myself a good listener and I want to hear what people need. And sometimes, that is very simple things going on in their everyday lives.”

“People need to be listened to. People have a voice and they want to be heard and included in the conversation. Right now, we have growth going on in Boneyfiddle and parts of the downtown. But everyone wants to be a part of that growth and see it in their own neighborhoods…Things are changing. There is lots of energy and it’s important that we spread that around so that everyone can grow together. We needs to work towards merging those in higher and lower economic levels. We can’t just focus on the wealthiest 10% in our community. We need to focus on everyone.”

Specifically, Gordon identifies four things she hopes to change if she is elected to the 2ndWard seat: she wants to develop a strategic plan, further integrating the university, build a sense of civic pride, and turn Gallia Street into an arts district.

“I’d like to see a new initiative in Portsmouth. In the museum world, we call it having a strategic plan. Its a road map of where we are going and where we want to be. We can sit down and look at every ward. Every ward has pockets that need attention. We don’t have unlimited resources, so, where do we put them? That’s where this can help.”

Building civic pride and a community identity is a method of reducing litter and dumping, according to Gordon.

“We have to sell Portsmouth to its residents,” she said. “If we do, people will start stepping up and taking that extra step for the City.” She said the City of Columbus completely re-branded itself in the late 80s and that led to a sense of community pride- as well as lots of economic development.

Unsurprisingly, the Director of our local art museum also wants to see the development of an artistic district along Gallia Street.

“It’s an idea someone brought to me, actually. But we now have the Roy Roger’s museum on Gallia as well. So there are two museums now. I would like to see Gallia Street and the esplanade continue to evolve and become a small arts district. We are walking distance to Boneyfiddle and we could really get the rest of the buildings here cleaned up and filled…There is just so much potential!”

In the end, Gordon says she brings a fresh perspective to City Council and hopes to be able to continue in her current role. She asks the voters to write her name in this November.

“I have studied creative communities and creative development within communities. Much of that is already happening here in Portsmouth and it’s really exciting. It will set us apart from other small towns trying to reinvent themselves in this economy. We are a creative city. We already bring people in all the time. I would represent the 2ndward and bring that creative growth mindset with me. I’ve enjoyed my time on council these last few months. I’ve learned a great deal. And I still have a great deal to learn. But, I want to learn and I hope the voters will give me that chance on election day.” 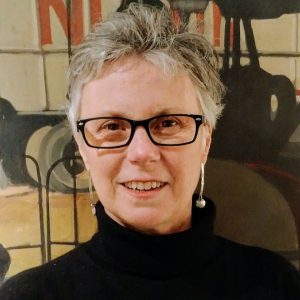