Robert George “Crazy Bob” Smith, 77, of Portsmouth, passed away Sunday, October 6, 2019 at this home. He was born November 2, 1941 in Miami, FL, the only child of the late George W. and Bernice Langlinhouse Smith.

Bob was a graduate of a military academy in the Miami area and of the Baptist faith. He worked as a groundskeeper and maintenance worker for his family’s golf course in Miami, and also worked in HVAC repair in the Portsmouth area and as a night watchman for M&D Cable.

An NRA member, he enjoyed hunting and visiting with his friends at Matheny’s Body Shop.

Surviving are a son, Bobby Michael Smith; a special nephew, William Melvin of Lucasville; and many friends.

A son also preceded him in death.

At his request, there are to be no services. Arrangements are under the direction of the Ralph F. Scott Funeral Home in Portsmouth. 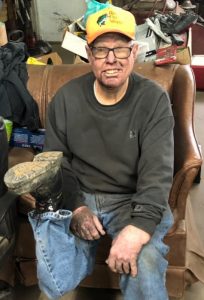