Paul Edward Rideout, Sr., 74, of Lucasville, passed away Friday, September 27, 2019 at the SOMC Hospice Center. He was born April 9, 1945 in Portsmouth, a son of the late John Everett and Sadie Frances Winters Rideout.

Paul had worked for 37 years at SOCF as a corrections officer, and retiring as an OPI supervisor. He was a member of the Aurora Masonic Lodge F&AM, served in the Army reserves and was a PHS graduate.

In addition to his parents, he was also preceded in death by two brothers, Charles “Sonny” and Harold Rideout.

Funeral services will be held at 11 A.M. Tuesday at the Ralph F. Scott Funeral Home in Portsmouth with Don Evans, Jr. officiating preacher. Interment will be in Scioto Burial Park. The SOCF Honor Detail will conduct graveside rites.

The family will receive friends at the funeral home Monday from 5 to 7 P.M. and one hour prior to services Tuesday. 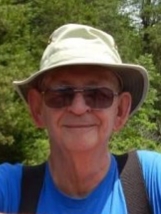