Nancy Irene Ashley, 84, of Lucasville, passed away Monday, September 30, 2019 at SOMC Hospice in Portsmouth. Born March 14, 1935 in Scioto County, a daughter of the late Thomas Edgar and Bicy O. (Hunter) Rhoden, she started working for the Scioto County Recorder’s Office in 1952 becoming Scioto County Recorder in 1984, she was a Democratic Committee Person and was a member of the American Legion Auxiliary. She is survived by a son, Kevin (Wendy) Ashley of Maineville; a daughter, Nancy (Brad) Jacobs of Owenton, Kentucky; two grandsons, Casey Ashley, Connor Jacobs; three granddaughters, Nicole Jacobs, Makena Ashley, Elissa Ashley; a special caregiver, Linda Timberlake, and a loving extended family. In addition to her parents she was preceded in death by her husband, Gerald R. Ashley on June 5, 2009 whom she married on June 24, 1958; four brothers, Milford Rhoden, Robert Rhoden, Ralph Rhoden, Thomas Rhoden, Jr., and two sisters, Virginia Cremeans and Marjorie Huff.

Funeral services will be conducted at 1:00 p.m. Saturday, October 5, 2019 at Erwin-Dodson-Allen Funeral Home in Minford with Greg Carter officiating. Burial will be at Bennett Cemetery in Minford. Friends may call from 6:00 to 8:00 p.m. Friday and one hour prior to the service on Saturday. In lieu of flowers donations can be made to SOMC Hospice, 2201 25th Street, Portsmouth, Ohio 45662. Online condolences may be sent to www.edafh.com. 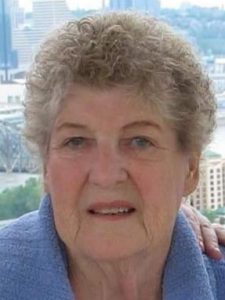