Merrill was married on May 15, 1954 to Emma Louise Rapp Rickman after being introduced by his brother Jack. Merrill and Emma were married until May 4, 2014, just eleven days short of 60 years when Emma passed away. They made their home in West Portsmouth, in a house he built himself, and had two children, Deidra L. Rickman Johnson and Dale Merrill Rickman.

During the Korean Conflict Merrill served honorably in the United States Navy and was particularly proud of being a submariner. Merrill was retired from Goodyear at The Portsmouth Gaseous Diffusion Plant where weapons-grade uranium was enriched for the United States Atomic Energy program and U.S. nuclear weapons program. After retirement Merrill and Emma owned the Pittsburgh Paint Company’s former Portsmouth store.

Merrill was a particularly proud grandfather to Taylor and Will and infinitely enjoyed their visits, particularly during his illness.

A funeral service will be held 11:00 AM, Wednesday, October 2, 2019 at Roger W. Davis Funeral Home, West Portsmouth with Interment will be at Scioto Burial Park. Friends may call at the funeral home on Wednesday starting at 10AM. Condolences may be sent to www.rogerwdavisfuneralhome.com 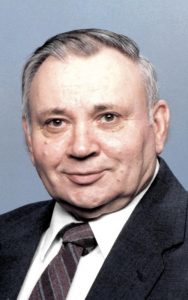